Penthouse for sale in the heart of Glyfada | a couple of minutes from the sea. Luxury accommodation. The apartment has an area of ​​181 m². 2-3 floors, plus private roof garden with swimming pool. 2 bedrooms, 3 bathrooms, ...

ΓΛΥΦΑΔΑ Γκολφ. Sale - 2 apartments by the sea in Glyfada (Athens) 188 m². The house is built in 1998, 2 apartments are for sale. One apartment on the last 5th floor of the building. With magnificent sea views. 4-room ...

Glyfada - Athens Riviera, this is the southern region of Athens. Until the beginning of the twentieth century it was called Exxony, after the discovery of several salty sources here, it was renamed Glyfada - which means “brackish source” in Greek.

They have more salts than in fresh water, but less than in sea.

Moderately expensive, relatively young, compared to the Acropolis, Tisio or Kifissia, coastal, and probably the most popular.

Although mistakenly called it a suburb of Athens.

While it is within the city, and beyond it along the coast are located: Voula, Vouliagmeni, Vari and Varkiza.

And beyond Varkiza, Athens is already ending.

And Glyfada is the same municipal district as: Zografu, Kifissia or Paleo Falirabout. 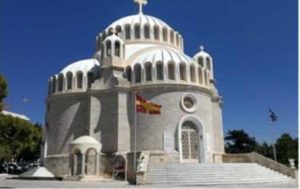 It is located on the plain of Athens, the coast of the Saronicikos Gulf, 12 kilometers south of the historical center of the capital - Plaka and the Acropolis, and 17 km from the international airport.

Altitude is only 5 meters.

To the east of Glyfada is Elliniko, from the north of Argyroupoli, from the south of Voula.

Elite hotels and shops are lined up in a row along the entire first line from the beach.

Kato Glyfada is the business and tourist center of the area, located opposite the sea. The main shopping streets are Grigoriu Lambraki, and Zisimopoulou, Metaxa, Cyprus, Posidonos with expensive shops, cafes, restaurants, taverns, night clubs. 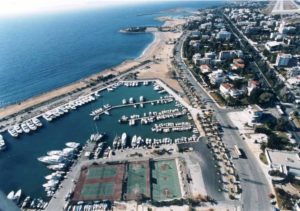 And Glyfada Golf is an elite place, got its name from the golf clubs located here. It is built up by expensive villas, and aristocrats and celebrities live here. The old-timers of Glyfada also remember the billionaire Aristotle Onassis, who lived here with his family.

The farther from the sea the price of real estate per sq.m decreases.

The beaches in Glyfada are considered good, and they really can be safe for health, and have fun with relaxation, since all international standards are strictly followed.

There are paid ones, and those where admission is free. But compared to the Varkiza beaches, which have been holding the palm for many years in a row and are awarded the Blue Flag, they lose.

Near the sea is the "Center for the rescue of sea turtles." 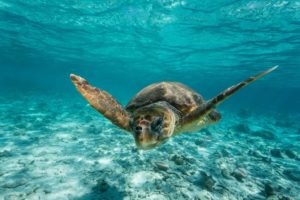 They are placed in large tanks with sea water, treated and released into their habitual habitat.

You can just go in and independently familiarize yourself with the life of turtles at the station.

At other times, you will have to pay for the tour.

The operation and maintenance of this center is not funded by the state or any commercial organization.

And lives off of voluntary donations.

An ancient necropolis was located in Eskon; here, vases of geometric style are discovered - this is the XNUMXth-XNUMXth centuries BC, which indicates that people lived here after the Bronze Age.

Archaeological excavations of the tombs of 1927 in the coastal line of Glyfada conducted by N. Kiparissis accidentally discovered the ruins of an early Christian basilica dating from the XNUMXth century.

The new history of Glyfada is much more modest. The luxurious resorts of Kato Glyfada formed in the early 1920s. At the same time, beautiful beaches began to be improved, the district's infrastructure and tourism developed.

The Second World War began in Greece (October 28 - OKH Day) 1940 with the invasion of the Italian troops Benito Mussolini from Albania. And on April 6, 1941, the Wehrmacht invaded Greece from Bulgaria, the Greek cities were subjected to massive bombing of the German Luftwaffe. Greece opposed the two armies for 24 days.

By the way, Denmark fought for its independence for as long as 6 hours.

The Greeks had great hope for the defense of their country in England.

It should be noted that Great Britain, as a "loyal ally" of Greece, and having on its territory 53 military contingent, and a large navy carried out a "brilliant military operation" under the loud name "Demon". And withdrew all its troops from the territory of Greece, and the Greeks selflessly covered their flight and betrayal.

And to this day, this operation is considered very successful in England.

Athens was hit hard during the war. In Glyfada, many houses are destroyed. Beautiful gardens turn into livestock pastures. And accordingly, the resort is in decline.

After the liberation, everything gradually began to recover.

The American military base located in the neighboring Elliniko area had a great influence on the development of the area. Money, fun, music.

And they began to grow like mushrooms after the rain - bars, the country's first fast food restaurants, hotels and houses.

Until 1960, on the site of modern Ano Glyfada there were pastures and shepherds. No infrastructure: no roads, no electricity, no running water.

The population of Athens was growing, housing was not enough.

People did not seek to develop land in Ano Glyfada.

And then the state issued a program: when buying the Eleftheros Antropos newspaper, it was necessary to collect several coupons, add a symbolic sum of money to them, and the family received a piece of land for construction, almost for free.

So Ano Glyfada was built up.

Today, only a very wealthy person can buy a land plot in Ano Glyfada, and build a house.